Note:  All links going to other websites will open in the same window. Use the Back button to return to our site.

STC Associate Fellow Marian Norby, 85, died of complications related to Parkinson's disease on Monday, May 20, 2002. Marian had been in hospice at Goodwin House in Alexandria.

Marian came to Washington, DC in 1941 and held several jobs with the Federal government. She organized a training program for new secretaries during World War II, which took her from her secretarial position to a job as a personnel officer during the war years. Marian was an early feminist activist working for equal employment opportunities for women in the federal government and after retirement, for the Older Women's League, the Gray Panthers, and AARP (formerly known as the American Association of Retired Persons). She was a director and one of the founding members of the Council of Former Federal Executives (COFFE).

The following is a reproduction of an article published in the STC Washington, DC – Baltimore (WDCB) Chapter’s newsletter, the Capital Letter, December 2001.

A Salute to Marian Norby

A dedicated chapter member since 1956, Marian Norby is now in hospice. Bill Stolgitis, STC’s Executive Director, reminisced about the interesting experiences and many contributions of his long-time friend.

Marian grew up on a Kansas farm and graduated from Kansas State University in 1938. Like many women of her generation, she came to Washington, DC during World War II to fill positions vacated by the men who left for the front lines.

One of her more exciting positions was on the White House staff during Franklin Roosevelt’s presidency. In 1948 she joined Harry Truman’s presidential campaign. As an editor for his speechwriters, she traveled by train on his famous “Whistle Stop” tour. After each stop, Marian edited the speeches to reflect the crowd’s reactions. In those days, rewriting meant retyping the whole speech and as she told Bill, “it was quite a feat to type while rounding a corner in a fast moving train.” She was an accomplished pianist and, like Truman, often played the piano on the train for nightly “sing-alongs.”

After the campaign, Marian worked at the Pentagon for the Department of the Air Force editing publications. Her work did not go unnoticed: she received the Meritorious Civilian Service Award from the Secretary of the Air Force. Although she retired from the government in 1980, Marian continued working as a freelance editor. In 1956 she joined the local chapter of the Association of Technical Writers and Editors, the organization now known as STC. By the time Bill became STC’s Executive Director in 1982, Marian was well established as a vital member of the Washington, DC – Baltimore (WDCB) Chapter. In acknowledgement of her efforts for the chapter, she won the Distinguished Chapter Service Award in 1990. 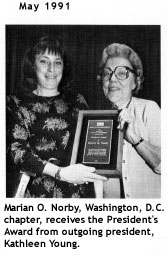 Perhaps Marian’s biggest accomplishment for STC was improving Tieline, the monthly newsletter for Society and chapter leaders. Originally, volunteers from various chapters developed the publication; however, in 1985 the Society decided to produce it from its Arlington headquarters. Marian’s constructive feedback after each issue was instrumental in improving and shaping the newsletter. Because of her commitment to the Tieline and her 16 years as manager of the Teller’s Committee (which validates the ballots for chapter elections), STC President Kathleen A. Young (1990-1991) presented the President’s Award to Marian in 1991.

Marian became an official recruiter for chapter and STC membership. As Bill put it, “she was a real arm twister.” For example, after making contact with a potential member, she would alert the STC office to watch out for the incoming application. She would also make a personal effort to welcome the individual to the Society. For her dedicated service to the Society and outstanding success in helping authors, she was named an Associate Fellow in 1992.

In addition to her volunteer work with STC, Marian is still a member of the Women’s Equity Action League, the League of Women Voters, and the National Organization for Women (NOW). Additional volunteer activities included participating in the Advisory Council to the Corporation for Pubic Television, the National Press Club, and as a member of the Board of Trustees of the Washington Citizenship Council, the American Society for Public Administration, and serving as president of the Mortar Board Alumni Association.

Marian’s achievements can be counted among the best and she is an inspiration to technical communicators. To see the full citation for her Associate Fellow Award, see the history page of the Washington, DC – Baltimore (WDCB) Chapter’s website at https://wdcb.stcwdc.org/about-us/chapter-history/history-fellows/#ASSOCFELLOW and scroll down to “1992.” To see the full citation of the President’s Award, go to https://wdcb.stcwdc.org/about-us/chapter-history/history-special-recognitions/#SOCREC and scroll to “Society-level honors and recognition” – 1991.

Register and join us for the 70th Annual Conference: STC Technical Communication Summit 2023 at the Hyatt Regency Atlanta, Georgia.
Date: 14-17 May 2023.

This website won an Award for Publication Excellence in the APEX® 2022 Awards competition!